Recently, while wandering through an antique store in Powell, Ohio, I came across just such a local history, Historical Collections of Ohio, by one Henry Howe, LL.D. Published in 1908, Historical Collections describes what Mr. Howe learned of Ohio’s communities during two periods of travel through the state: the first in 1846 and the second in 1886-90. Thus far, I have discovered several interesting details about my new home state. One in particular I found arresting. In discussing Shelby County, in western Ohio between Lima (the birthplace of my maternal grandfather, Ernest Anderegg, incidentally) and Dayton to the south, Howe quotes a description in “Sutton’s County History” of a German Catholic settlement, the “village of Berlin,” in what is now the Fort Loramie, Ohio. 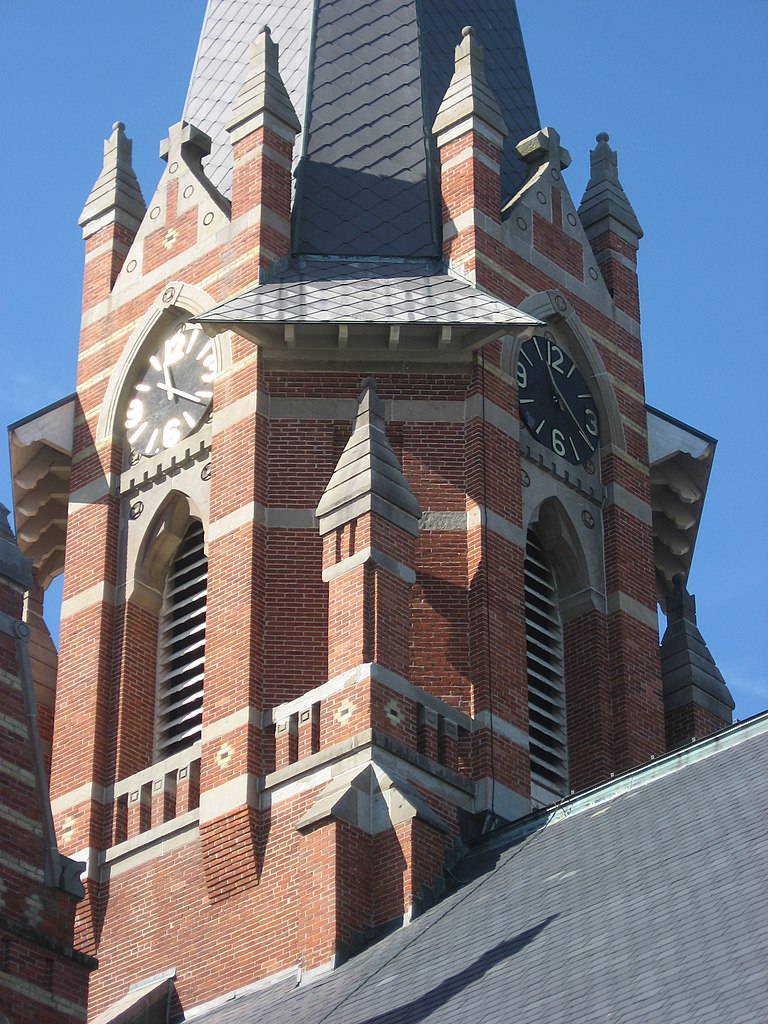 A detail of the steeple of St. Michael’s Church

Berlin, as “Sutton’s County History” describes it, was in many ways not so unusual, at least for German settlements in 19th century America. It was characterized by hard work, adept farming practices, and the orderliness that were at the time remarked of other German colonies. There was, too, what one might call – as the 19th century German writer, Moritz Busch, did call it – the “thickheaded peasant’s conceit” that, along with their stolid adherence to their mother’s tongue and their factionalism, earned Germans the disdain of their Anglo-American neighbors. Germans, said Busch, had a hard time getting along with one another; and if the description of Berlin in Howe’s quoted source is accurate, they didn’t try very hard to get along with anyone else either.

Yet, there was another element that makes the old Berlin settlement interesting to the student of American ethnic cultures. That is, the settlers’ devotion to religion. To put this devotion in its proper context with other aspects of life in Berlin village, I shall quote in its entirety the passage from “Sutton’s County History”:

A marked characteristic of the people [of Berlin] is the industry observable on every hand. This German element came here into the woods, and by hard incessant toil cleared away the primeval forest, wringing farms from the wilderness and building a town on the ruins of a forest. In common with the people of the township the inhabitants are almost uniformly Catholic in religion and Democrat in politics. There were peculiarities which brought about these results, among which we mention as one factor of Rev. Mr. Bigot. After settlement here the Germans strove to prevent the settlement of Americans in their midst, and by different methods very nearly succeeded. Still a few straggling Americans settled on lands within the township, but each soon found it desirable to leave; and so was bought out as early as he would sell, and was generally succeeded by a German. This at least was the plan of the German settlers themselves, and keeping the plan in view, they have preserved the characteristics of nationality, religion and politics up to the present.

Throughout the town and township the German characteristics are preserved to such an extent that a stranger would question his senses as to the possibility of a community no larger than this, maintaining the integrity of all German habits, customs and manners. They have cleared excellent farms, erected substantial buildings, and in their own way and according to their own ideas, pursue the enjoyments of life. Perhaps their church comes first, and the building is almost fit for the abode of personal gods. Next come social customs, and fronting these is lager beer, without which it appears life would be a burden, and liberty a misnomer. Following this comes politics, in which field some one man will be found to hold an electoral dictatorship, and on election day Democratic ballots will be found “thick as autumnal leaves in Vallombrosa.” There are, in short, characteristics here which the next generation will not entirely outgrow nor outrun.

One might well wonder whether in naming the Rev. Mister, “Bigot,” the author was not indulging in Bunyanesque allegory. Yet, it seems, “the Rev. Mr. Wm. Bigot” was really so named. Without irony or sarcasm, Howe praises the priest for some generous and maybe even unbigoted service he performed in the Franco-Prussian War. During that conflict, Father Bigot “was given the pastorate over 12,000 captured and wounded French soldiers who were within the enemies’ lines,” passing “eleven months of arduous labor, enduring many privations and relieving suffering.” Yet, this commendation follows Sutton’s sniffing expressions of distaste and disapprobation: such as the reference to the beautiful St. Michael’s church (still standing in Fort Laramie) as an abode “almost fit for … personal gods”; then the dripping disdain shown toward the social custom of lager beer, “without which it appears life would be a burden, and liberty a misnomer.” If Bigot was the priest’s given name, Sutton might have thought it a fortuitous accident of history, given what his “History” records of the treatment Berlin’s Germans meted out to those who shared neither their nationality nor religion.

And, in this last point, we might agree with Sutton. (Myself, I think the Berliners were right about beer.) After all, applying what seems subtle and not-so-subtle social pressure to settlers to get them out of one’s community, because they are not of one’s national group and, even more significantly, not Catholic – doesn’t that smack of bigotry? It certainly does not seem too evangelical, not to mention, very ecumenical (to indulge in a bit of anachronism). One does not very effectively win one’s neighbors over to the Church by snubbing them.

Some historical context, however, could make Berlin’s own expression of peasant’s conceit somewhat more explicable. Among the motivations for both Catholic and Protestant German immigration to the United States was the desire to preserve ancestral culture in order to protect a religious culture. These religiously-motivated German settlers thought Anglo-American culture particularly corrupt; it was a culture, as the German priest, Anton Walburg of St. Augustin’s Church in Cincinnati expressed it in 1889, given to extreme individualism, divorce, and free love. To combat these disintegrating moral tendencies, many German leaders thought it was necessary to keep Germans German – because the peculiar German cultures to which their people belonged were imbued with a Christian sensibility. German Catholics and German Protestans both believed that culture is important, that it forms our minds and hearts, imbuing them with a taste for what the culture proposes as the highest truths. For German Catholics to be assimilated to Anglo-American culture would be to inculcate in them an ethos opposed to a Christian ethos and thus habituate them to non- and even anti-Christian ways of thinking, feeling, and acting.

As I have noted, Berlin was not the only such community. Only 36 miles due north of Berlin was Delphos, founded as a German Catholic colony in the 1830s. Another example is St. Nazianz in Wisconsin. The founder of St. Nazianz, Father Ambros Oschwald, said of his settlement, “We did not come to America to become rich, but to save our souls.” (Oschwald’s legislation, incidentally, was imbued with a sense of social justice. St. Nazianz’s constitution not only regulated public morality but so directed community life “that the poor shall receive the same care as the rich.”) Frankenmuth, Michigan (where my family settled in 1846) attempted similar measures, to keep the settlement Lutheran by keeping it German. 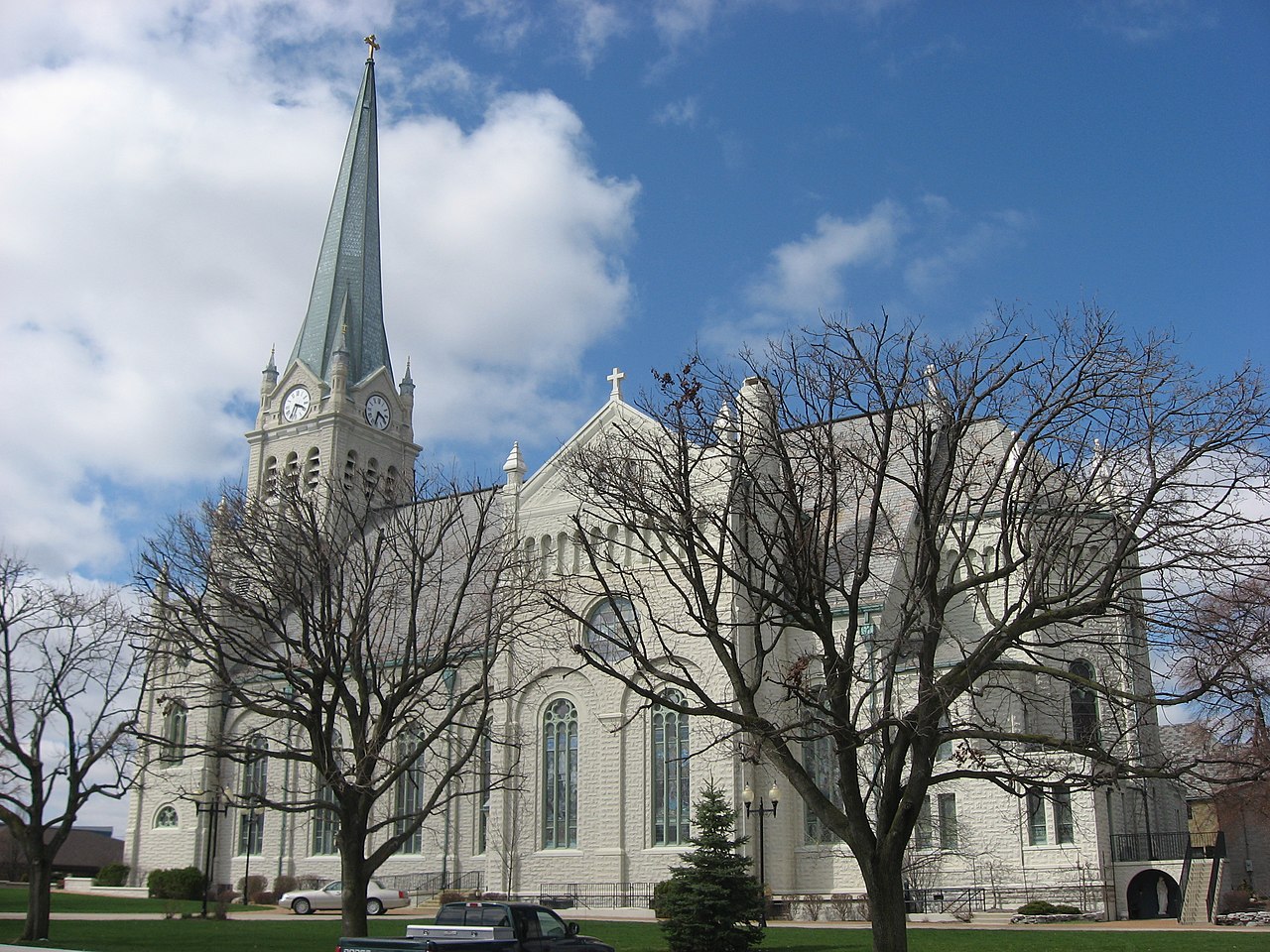 But what about evangelization? Though, it seems, making America Catholic was not a primary motivation of most of these German settlements, preservation it seems was not seen as opposed to evangelization, but rather an aid to it. Walburg himself alluded to this. Though he insisted, against certain American Catholics who were pushing for Catholic assimilation to American life, that “transition from one nationality to another is always a dangerous process, and it will not do to hasten it, and to force foreigners to Americanize,” he thought maintaining Catholic national enclaves was a surer road to winning America to the Church than assimilation would be. “If American culture is ever to be converted,” he wrote, “it must be done by the clergy and population already Catholics. The most efficient portion of our Catholic body are of foreign birth and training, and will be for some time to come.”

This is the first in a series in which I shall look at the question of culture and its importance to human society. In particular, I shall address the controversy in 19th century America between Catholic assimilationists and what might be called Catholic cultural integralism. Please follow this blog for future postings on this subject.